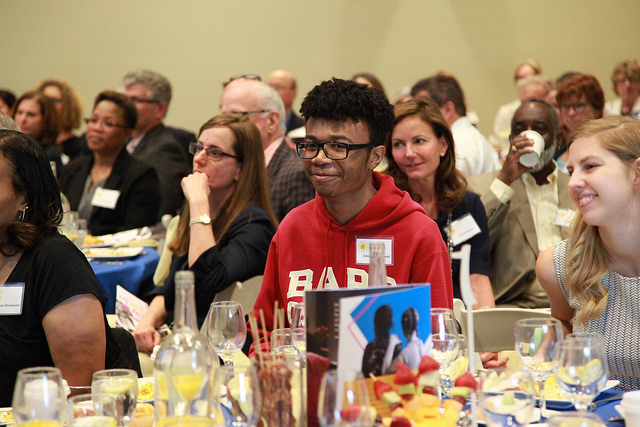 My name is Jahsol Drummond. I am eighteen and currently a senior at Bard High School Early College.  I have attended Baltimore City Public Schools since kindergarten and I have never been a big fan. I was always told I was a good kid but my grades never really reflected that. From early on I was put in a box. Once I got to middle school, classes were separated and labeled 31 through 34. We all knew that groups 31 and 32 were supposed to be for the smart kids and 33 and 34 were for the “dumb” ones. I was in 33, and the stigma of feeling lesser set in, but I was also just glad I wasn’t in 34.

When I didn’t get good grades in middle school, I couldn’t get into a good high school, and a cycle began. This is the problem. In middle school, a composite score based on the grades you earn determines where you can go to high school. Once kids get behind in their education here in the city, they get derailed and there isn’t much help to get you caught up. Luckily, I found Bard High School Early College, a school with college-level expectations that encourages its students to think. Bard gives kids who haven’t done well in the current system a second chance and (I think) a better education than any other city school can provide. 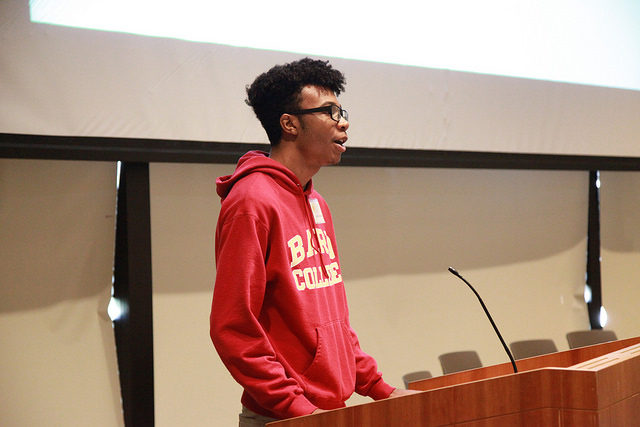 I first learned about the Bloomberg Arts Internship from Bard’s guidance counselor. This program, which is managed by Young Audiences, matches students with arts and cultural organizations for a paid internship over the summer. I wanted to be a filmmaker, but I wasn’t sure how to go about it.

So, I was excited when I was accepted into the program and Young Audiences matched me with Tim Nohe, who is the Director for the Center for Innovative Research in the Creative Arts (CIRCA) at UMBC and a filmmaker. We clicked instantly. We saw that we had a common interest in using film to communicate perspectives.

On the first day, Tim and I hit the ground running. He taught me how to use the camera, and how to use editing software. My first project was to film interviews with the arts staff at the university. I was involved throughout the entire production process: from researching the artist, to formulating the questions, filming the interviews, and editing the footage. Tim believed in me and over my six weeks at CIRCA, I was exposed to the world of professional filmmaking and working with people to create pieces of work that I cared about. I made something I was proud of and a spark ignited. That first-hand experience helped me get involved in the local industry and I came away feeling like I had earned the title of filmmaker.

On top of connecting me with a great worksite, Young Audiences helped me and my fellow interns apply to college. We spent time working on our college essays and doing extensive research on the colleges we wanted to attend for the next fall. Today, I’m graduating from Bard with an Associates degree and I will be attending Bard College at Simon’s Rock in Massachusetts on a full-ride scholarship and with all of my current credits carried over.

At the end of the summer, Young Audiences required me and the 24 other Bloomberg Interns to present what we learned in a public presentation in front of hundreds of people. I had the opportunity to show what I had learned by producing my own video for my presentation. I was really pleased with how it turned out, and there were leaders in the city’s arts and cultural industry who were impressed with my work too.

My dream is to communicate the problems in our educational system through film, and now that I have finished the program, I know that I can do this. I hope my films inspire a spark within others to make a change. I now know enough to trust my spark to guide my work, and Young Audiences hiring me to film all three of YA’s summer programs this year means that others believe I have it in me, too. My career has only just begun, and it’s already so exciting. Thank you to Young Audiences and Bloomberg for opening this world up to me, and a special thanks to Tim for showing me the way.