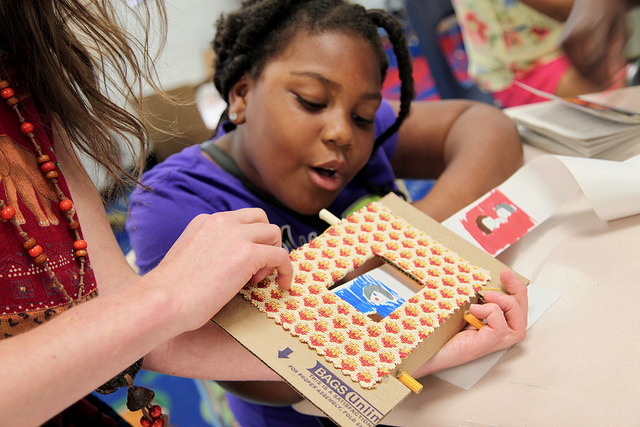 It was a summer filled with activity, singing, dancing, reading, creating, and sunshine. We witnessed the excitement of mastering new skills and discovering new talents. We felt the calm of classrooms illuminated with only the rays of light peeking in from behind drawn shades, students enveloped in peace, quietly drawing, ink and graphite on white paper.

When families initially enrolled their children in our Summer Arts and Learning Academy, we asked them why their child was interested in participating. Many stated that their children were creative and hoped that through the program, they’d be able to enhance their skills. Others emphasized the integrated academics or latent benefits of the arts. Some registrants celebrated the availability of the arts and educational summer program, as these opportunities are limited in Baltimore City.

Did our Summer Arts and Learning Academy live up to families’ expectations? Culmination ceremonies came to a close, classrooms were disassembled and packed up for next year, and students prepared for their next summer adventures. We asked parents and families if they’d give us feedback about their experience by filling out a survey. Their responses poured in- 413 of them to be exact. We discovered that in Summer Arts and Learning Academy, parents watched their children not only learn, but grow and thrive artistically, emotionally, and academically.

When asked about any positive changes they noticed in their kids, one parent replied, “An eagerness to attend school. IN THE SUMMER! Who knew?!”

87% of families who completed surveys told us that their child found something new that he or she has fun doing. “My son began to enjoy sewing and dancing,” one parent told us. Another let us know that her grandson was very proud of the work he did in ceramics class. “He usually gives me all of his drawings and art projects, but he kept his claywork for himself.”

Even when one particular art form grabbed a student’s interest above all others, the children in Summer Arts and Learning Academy developed a deeper appreciation of and openness to all art. Students discovered that flexibility leads to new passions, discovery, and opportunity. “I learned that I am exceptionally good at ceramics. I knew I would like it but I didn’t know I would actually be good at it,” a rising sixth grader told us. “She was disappointed that the Coldstream Park site didn’t offer theatre for older kids,” her dad explained. “We’re working on ‘rolling with it,’ though, and she ended up really loving African Dance and Ceramics. She would never have known, otherwise.”

Parents told us that their kids were excited to get to the academy every morning, on time. When families reunited in the afternoons, kids would talk and talk about everything they did that day. When asked about any positive changes they noticed in their kids, one parent replied, “An eagerness to attend school. IN THE SUMMER! Who knew?!”

Upwards of 80% of parents who responded told us that they noticed an increase in their child’s reading and math skills. With this strengthening of skills, their children became more confident. Of one student who enjoys writing poetry, we were told, “she will now actually share her writing with others.” Many families reported their children not only enjoying reading but choosing to read books over watching television. Still others described students proudly reading on their own and teaching younger siblings what they had learned.

The positive changes parents noticed in their children exemplified 21st Century Skills, a set of higher order skills that have been identified by educators and business leaders as being critical to a person’s success in careers, in college, and as a citizen. These are skills that typically cannot be measured through standardized testing and include critical thinking, collaboration, communication, and creativity.

Through Summer Arts and Learning Academy, students were introduced to many new ways of thinking, seeing, and expression. They learned to look at things from different perspectives through the eyes artists, characters in literature, and through new friends, which made their own experiences more joyful and meaningful. Children embraced their curiosity, asking questions, exploring, and researching independently. “My daughter is better able to integrate her love of arts (fun) with learning (not as much fun) and see ways to make learning something that’s both fun and something she can accomplish,” one mom told us.

Families described their students as being more social, friendly, outgoing, and connected. One student told her mom that she “enjoys being a loving and caring friend.” Another student “wants to take care of the neighborhood.” Students discovered that they liked working in groups and parents thought their children were now better able to deal with conflict. Through collaboration, the kids learned how to communicate, compromise, and achieve a common goal. They learned to ‘roll with it’, an enviable and necessary skill for 21st century children and adults alike.