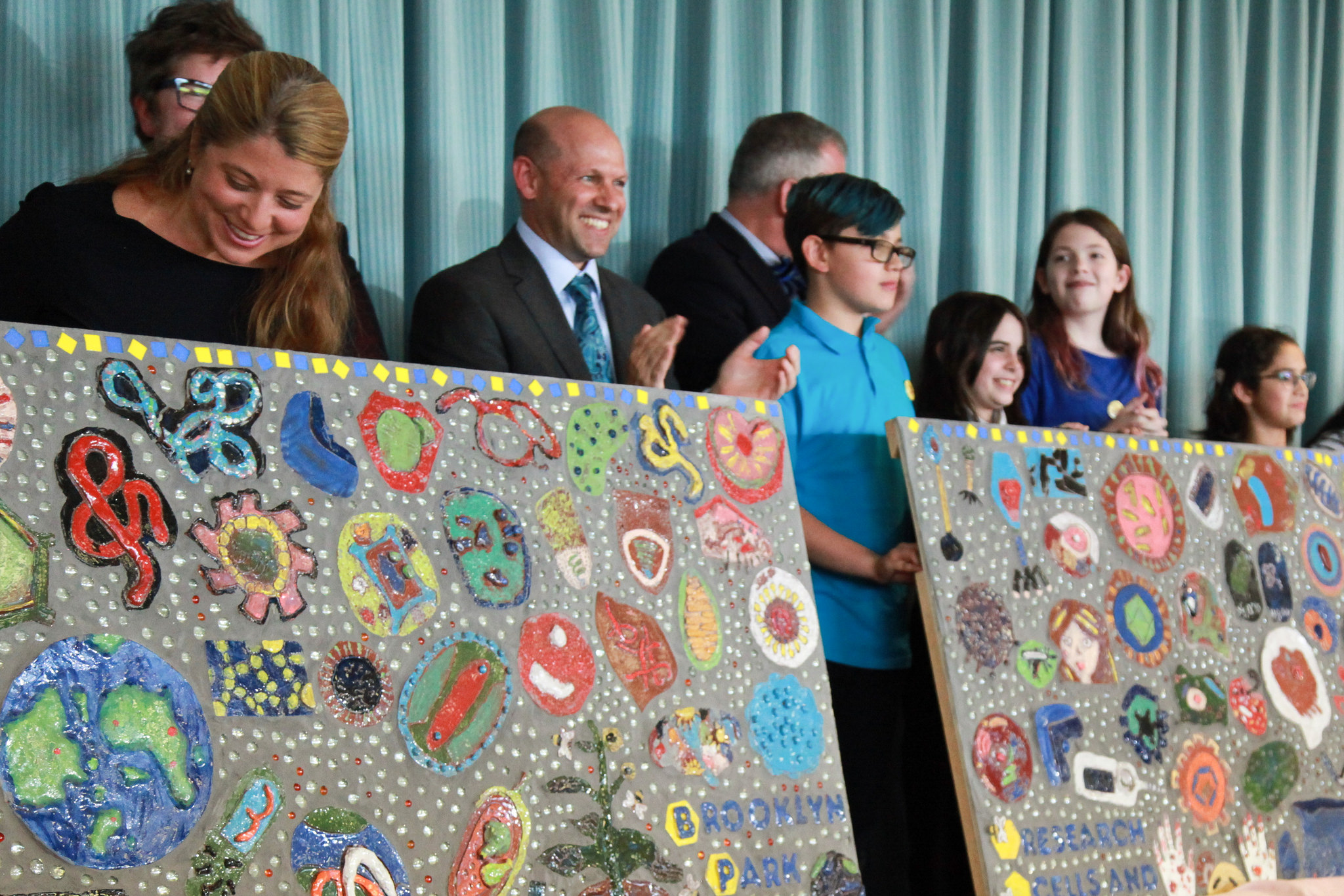 Excited. Proud. Love. These are the three words that I heard repeatedly as I attended the unveiling of the mural that sixth-grade students from Brooklyn Park Middle School created. Though these are not words typically linked with a middle school science project, they help illustrate the magic that is produced when you combine science education with an arts-integrated approach to learning.

The collaboration between their science class and a professional teaching artist from Young Audiences, in partnership with Arts Empowered Minds Initiative (AEMI), resulted in a 10-foot science-themed mural, titled “Brooklyn Park Middle Students Research Cells and Viruses.” As explained in the program, the mural “illustrates the dynamic, multifaceted interactions occurring thousands of times a day between cells, viruses, and living things.”

I wasn’t sure what to expect as I entered MedStar Harbor Hospital‘s Baum Auditorium in South Baltimore, but I immediately felt welcomed as a saxophone quartet from Brooklyn Park Middle played classical music. Their melodies formed a soothing backdrop to the animated conversations between medical personnel, artists, educators, politicians, parents, students, and others who had gathered for the event. A delightful spread of food – chicken satay, veggie trays, fruit and cheese platters, and even cupcakes for the kids – provided by the catering arm of the hospital, Morrison Healthcare, ensured that no one would walk away without all their senses satisfied.

But I digress.  As the reception wound to a close, the formal program began. First up, Stacie Sanders Evans, the President and CEO of Young Audiences. Reaching for a hospital analogy, she spoke of Young Audiences’ facilitating role behind the scenes as the “spinal cord” or “backbone” that makes the arts-integrated learning possible in area schools. She described how Young Audiences partners with schools and other organizations like AEMI and the Arts Council of Anne Arundel County (who helped fund this project) to pair core curriculum teachers with professional teaching artists to enhance learning experiences in Maryland classrooms. Rather than rote learning, students explore academic subjects in any number of hands-on, arts-oriented ways.

Next was Dr. Stuart Levine, President and Chief Medical Officer of MedStar Harbor Hospital. He told the young student artists just how meaningful their creation would be to the hospital, saying that it would be proudly displayed in MedStar’s Emergency Department lobby. He talked about the VIPs in the room – the sixth graders – who had created this mural. He told them, “When community members come in for care, when they’re sick, when they are at their moment of need, they’re going to come into a place that has this incredibly hopeful work on the wall that’s made with love by the kids of their community.”

Then Dr. George Arlotto, Superintendent of Anne Arundel County Public Schools, spoke, stressing, “People who don’t even know you love you; people who don’t know you are proud of you.” This was the legacy that, even as young tweens, they were creating for their community.

Following Dr. Arlotto, the two teachers who guided the kids through the process spoke. Lisa Radike, the Brooklyn Park Middle school science teacher, recalled that this process helped the kids learn more than just the science of cells, it also helped them “learn how to get along, how to work together.” Amanda Pellerin is the Young Audiences artist who taught them to mold clay, shape it into the cells and viruses they were studying, and then assemble an entire mural from all the different parts they had imagined and created. As she looked proudly onto the students, she made sure they understood the significance of what they had done. “You now have artwork that is on permanent display– and you’re not even out of sixth-grade yet!”

Finally, it was time for the unveiling of the mural. As the students and their teachers surrounded the mural, people leaned forward in their seats, many creeping to the front with cell phones to capture the much-anticipated moment. After a few more remarks from one of the students who reiterated the theme of how creating the artwork had required them to put aside differences and work together, the veil was cast off and everyone could finally see the finished artwork. 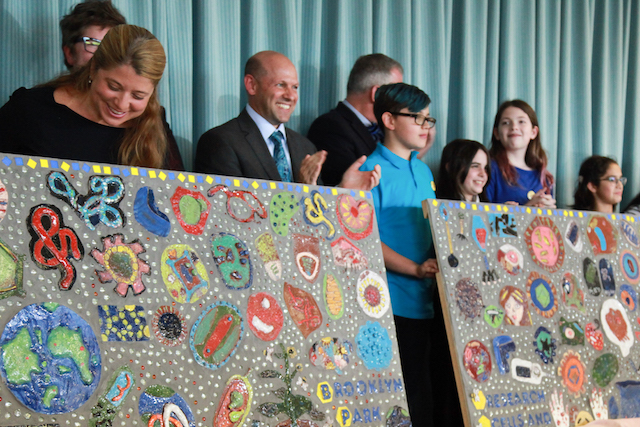 Brightly colored cells wiggled and squirmed their way across the surface. And like a visiting rock star, the mural sat “patiently” as a host of people came up to be photographed with it.

As the event wound down, I finally managed to talk to one of the students, asking simply, “How long did it take all of you to create this?” His answer pulled me out of my adult world of man-hours and Outlook schedules. “About 10 classes.” 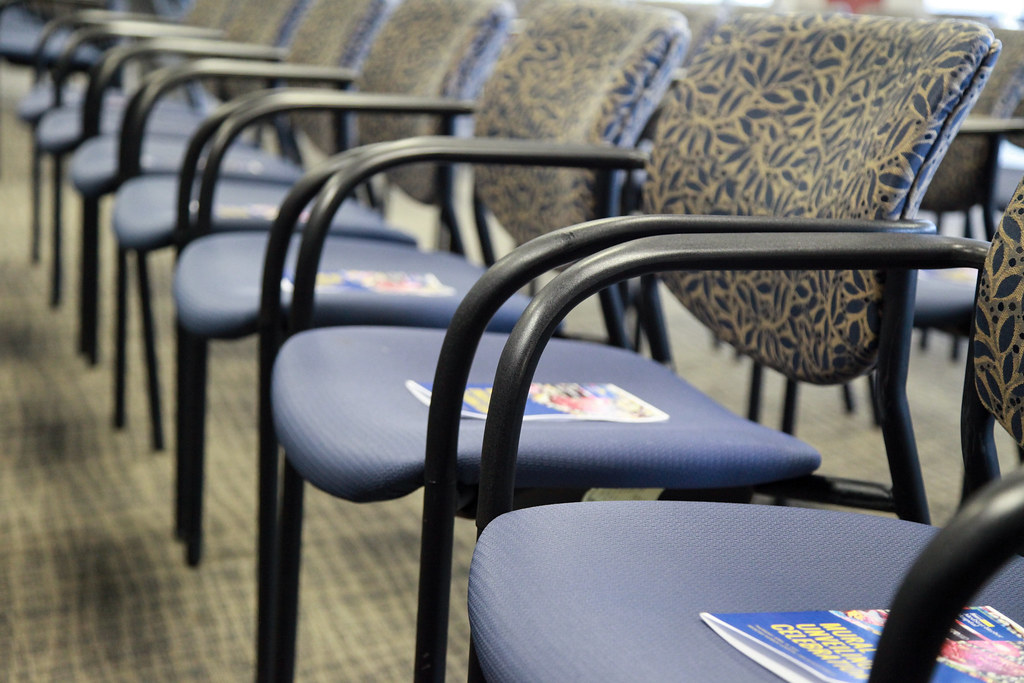