Summer Arts and Learning Academy: The Name Says it All

Seedfolks. Bizz Buzz. These are just a couple of the new things I learned about when I visited the Summer Arts and Learning Academy at Thomas Jefferson Elementary/Middle School in Baltimore.

And learning through the arts is the whole point of this summer academy, now in its third year of operation. Young Audiences/Arts for Learning, in partnership with Baltimore City Public Schools, operates four of these academies at schools throughout the district as part of a system-wide arts-integrated strategy to reduce summer learning loss in literacy and math. Approximately 1,144 kindergartners through fifth graders take advantage of this free, fun-filled educational opportunity.

My first stop was to meet Site Director Kristin Taylor who manages the program at Thomas Jefferson. As we headed to the first classroom of fifth graders, she enthusiastically filled me in on the size of this particular academy (280 students), its average daily attendance (250 students), and the benefits provided at every site to help parents and kids (after-school care until 6:00 pm and free breakfasts and lunches served every day to each student).

As we walked through the halls, student-created posters, snippets of conversations, and the sounds of music offered glimpses of the learning that was taking place. 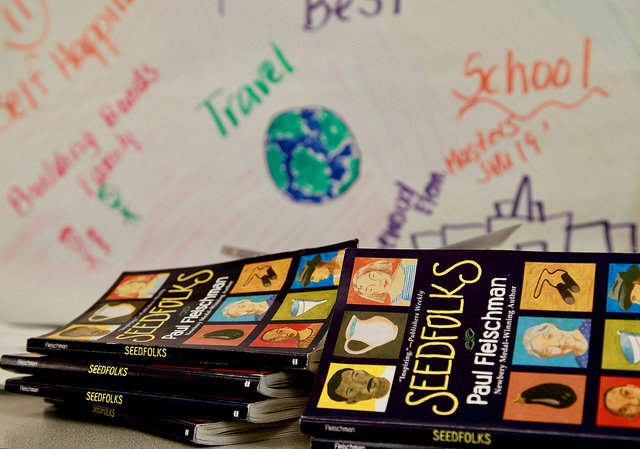 I entered the fifth-grade classroom of Ms. Paige and visual artist Mama Sallah just in time to watch a production of a chapter from Seedfolks, a book that shows how a neighborhood is transformed as people from different cultures interact in a garden. After the first group performed, I got a chance to ask Kenaya, one of the student actresses, about the book.  She explained to me that each chapter of the book focused on a different character. The classroom had been divided into groups, each assigned to act out a different chapter of the book. These groups were to then silently act out what the narrator was reading.

Kenaya’s group focused on Kim, a Vietnamese girl from the first chapter. The story starts with the girl staring at a portrait of her father. While one student narrated, others acted out the parts of Kim, the father’s portrait, and even more characters as the action moved into the garden Kim had planted.

I enjoyed watching their attention to the story and how each child handled their role, whether it was bending down to dig in the “dirt” or, like the young man playing the role of the portrait, staring silently into space, giving no indication that he was anything other than a photograph frozen in time. These were serious actors, hard at work.

The next classroom was quite a contrast. Ms. Chase and hip hop musician Jamaal “Mr. Root” Collier were teaching math to a mixed classroom of fourth and fifth graders, and I had arrived in time to witness a game of Bizz Buzz. The children formed a large circle in the room, then took turns doing math calculations in their heads, making sure their answer was either a multiple of three or five. Emotional sounds quickly filled the room: Squeals of excitement for the game, celebratory cheers as someone answered correctly, silence filled with tension and pressure as someone struggled to find the right number, and supportive classmates whispering, “You can do it!” and “You got this!” 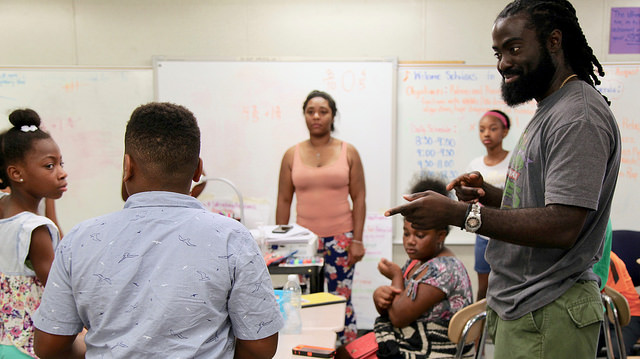 I have to admit I never did quite get the idea of when you yelled, “Buzz!” or “Bizz!” instead of a number, so I guess I’m going to have to admit that I am NOT as smart as a fifth grader. Luckily, they are! 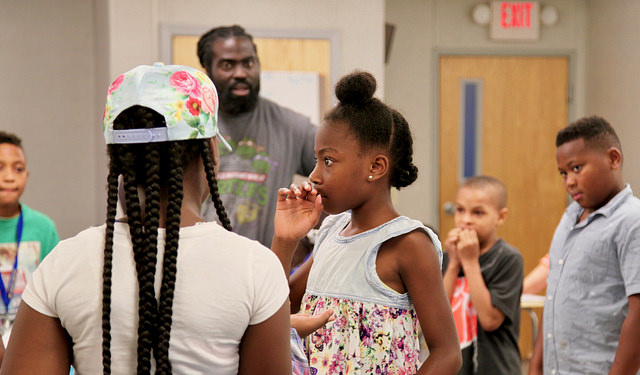 The next classroom was filled with third graders who were also working on math. However this time the class focused on word problems and measurements. Without the drama of Bizz Buzz, this classroom was much quieter with children working at their desks. As I wandered around the room, one outgoing and cheerful girl, Mikhia, came up to me.  I probably looked a little lost because she explained to me what was going on – how they were learning about different cultures.  I asked her if she liked the Academy, and she grinned broadly and nodded her head, yes.

“The teachers,” she answered without hesitation.

“They are nice, loving, and helpful.  I’m learning so much this summer!” 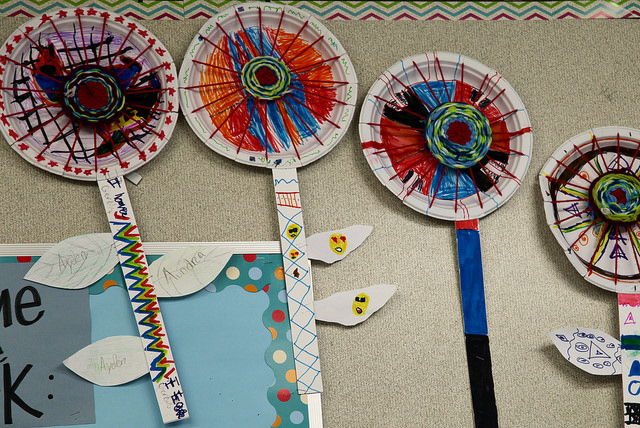 The last classroom I visited was composed of first graders.  I noticed a colorful picture on one boy’s desk of a volcano with a person going up the side of it and asked him about it.  “Who’s that?” I asked, pointing to the person.

At that point, we were interrupted as it was time to line up for lunch.  But before he left, I got another opportunity to ask him about his work. “Why are you walking up the side of the volcano?” I asked. He seemed a little confused but answered gamely, “I’m not walking, I’m flying.”

“Oh,” and now it was my turn to be a little confused.  “You must be very powerful to fly.”

By now the girl in line behind him decided she had to help this poor confused person. Explaining patiently but emphatically, she corrected me. “It’s not powerful. It’s imagination!” At which point, I learned that their classroom was focusing on stories that dealt with imagination. So, yes, flying makes perfect sense. I’d rather fly over a volcano than walk up it, too!

As the children headed off to lunch, I thought about my first morning at Young Audience’s Summer Arts and Learning Academy and all the kindergarten through fifth-grade pros who had guided me through the learning process. I realized I had learned a lot, too.

For example, I learned that reading and acting out the story is a powerful way to concentrate on both the characters and the narration. I learned that math can be extremely riveting and exciting. I learned that different cultures can guide your math skills. And I learned that I need to let my imagination soar. But most importantly, I learned that combining arts with learning is fun – and effective – and that’s why the kids love it. 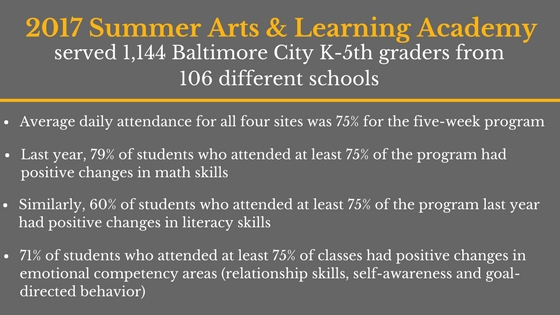