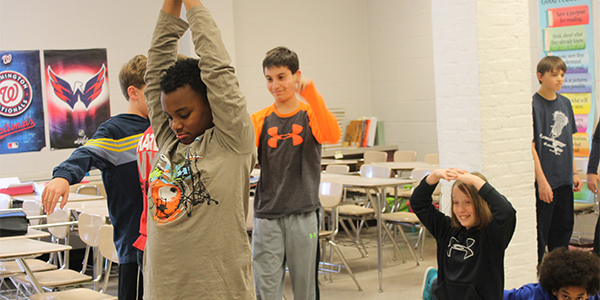 Allowing students space to breathe and grow through theatre

Middle school is an awkward stage when you don’t know who you are sometimes. I believe that theatre has a special ability that allows students room to breathe and learn about themselves. So many of my middle school students—even some of my high school students—need this space. They are body-conscious and hair-conscious and wondering, “Am I good enough?” and, “Do I fit in this clique?” But when they step on stage, theatre helps them let go of these worries.

Young Audiences ensemble Synetic Theater recently completed a residency at Westland Middle and it truly was an awesome experience for the students to see role models who exhibit a carefree but committed attitude in theatre. The actors from Synetic showed my students that they can step out of themselves and go ahead and do their thing. It brought them so much freedom.

I knew of Young Audiences and reached out to them because I knew I had a wonderful group of eighth graders who I wanted to expose to another level of theatre through a residency program. I wanted them to look at theatre the way professional actors do and experience different methods and styles. I also wanted to include the sixth and seventh graders in the residency because I was hoping to whet their appetite for theatre. I wanted to build that desire to participate in theatre at school. I wanted them to see that it is not just fun—that there is skill involved.

Synetic taught students that they should think of their bodies as their acting instruments and introduced theatre exercises that focused on warming up the body. Students no longer saw acting as just walking on stage and reciting lines. With Synetic, they had to think of warming up the neck and the head and the eyes and the legs. During these exercises, students also practiced concentration and mindfulness.

Synetic worked with students on movement and characterization. I wanted my students to have the latitude and freedom to be someone other than themselves on stage. It is hard to overcome the fear of rejection from their peers when trying something new, but Synetic was able to pull them from where they were to a new place. As a teacher, it gave me what I needed in terms of getting students to step outside themselves. Synetic made my job so much easier.

At the start of the residency, I was concerned about one student, Matthew*, who is a talented athlete. I worried that he would be hard to engage in the program because he did not identify himself as an actor. During the program I saw Matthew change when he saw the male actors from Synetic demonstrating the theatre exercises. The actors also singled him out with praise during the various activities, saying, “That is really good. I like that. Keep doing that.” Matthew has totally changed since this experience. He can’t wait to get to theatre class now. He has come to see himself in a new light—he is not just an athlete but an actor, too.

During the residency culminating event, the sixth, seventh, and eighth graders all had a chance to demonstrate what they had been working on with Synetic in front of their classmates and parents. After they saw the feedback and applause from the audience, my students walked out of the media center like they had just delivered the best performance in the world. They were thrilled with what they accomplished in such a short period of time.

In theatre class students build relationships and bonds. They know that it is an environment where they can truly be themselves. They can express themselves and no one will judge them. They can be silly and ridiculous, and no idea is crazy or dumb. Because of this residency we were able to expose more students to the power of theatre, especially those who may not have opted to take a theatre class before this experience.

It is great to be able to rely on resources and partners like Young Audiences to reach the goals that you have in mind for your students, and that is exactly what happened with this residency. It took my kids to a place where they are comfortable being on the stage and outside of themselves.

Learn more about Synetic Theater and their program offerings here.

*Names of students have been changed to protect their privacy.