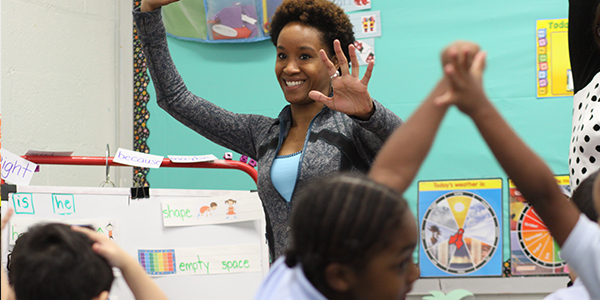 Empowering youth through my art form is something that I’m very passionate about. As a dance teaching artist, my role in the classroom is to enhance students’ development in decision-making, communication, and self-confidence through individual and shared movement explorations and experiences. Students learn how to control their impulses and self-manage when it is time to be silly and when it is time to stop and focus.

I recently completed a year-long Maryland Wolf Trap residency at Holabird Academy with teacher partner Ms. Katie Fincke and her pre-kindergarten class of students ages three to six. Our residency specialized in Language Arts with a focus on narratives and storytelling, so Ms. Fincke and I found ways to integrate movement experiences into the curriculum.

We accomplished our major teaching goal by using the elements of dance to help children convey meaning. We did this through a series of six different books that Ms. Fincke read with her students throughout the year. Ms. Fincke and I guided the children through the process of generating imaginative ideas about how to portray and connect to moments in the story through movement. Ms. Fincke’s class had many students whose first language was not English, so our goals uniquely overlapped with language development and vocabulary enhancement.

Ms. Fincke and I wanted the children to define and understand the meaning of creative movement. Our dancing activities did not follow the typical routine of me modeling a movement and students mimicking me. It was more about finding a way for me, Ms. Fincke, and the students, to have the experience together. Ms. Fincke and I didn’t want to robotically lead the children by saying, “Arm up, arm up, down, turn, turn!” Instead, it was the children leading us. We would hear, “No, let’s do our arms like this!” or “Let’s move like this! Let’s go here!” Students were given the chance to be creative and collaborate with their teachers and their peers. They were empowered to speak up and share their ideas because dance has no wrong answers. We encouraged our students to improvise without fear because we wanted them to know that their thoughts and ideas were valued. It’s a scary thing to express yourself with your body in front of a crowd. We wanted them to find a comfort level that would allow them to express themselves without limitations.

When I first walked into Holabird Academy, many of the students struggled with understanding personal space, body impulses, and self-confidence in creating and sharing ideas. Ms. Fincke and I have seen so many students flourish during the course of our partnership, but one student who made tremendous strides in social development and leadership was Oscar. We have watched Oscar become a leader and set a great example for his peers. He was never afraid to demonstrate his ideas through dance. He encouraged his peers to make strong independent choices. His classmates have been able to take risks and explore their creativity because they saw Oscar doing just that. Oscar demonstrated his leadership through an activity called the “mirror game,” which required students to slow down their energy and express themselves through dance in a calm and channeling way.

During the mirror game, one student at a time would face the class from the front of the room and then create slow movements with their body. The goal was to get the rest of the class to slowly repeat the leader’s movements as if they were the reflection in a mirror. Oscar really took interest in this activity and whenever he was up at the front of the room, he made sure that his movements were clear for his classmates to follow. Because he took the activity so seriously, there were times when other students would poke fun at him, but he didn’t let it bother him. A great leader is not somebody that forces their own ideas on people, but explores how people can share ideas together. Oscar led this activity with the intention to work with everyone as a team and that trait was very admirable.

What I loved most about working with this group was that I was not only able to teach them, but they were always teaching me. During the first few sessions, we would sing a greeting song in English, but by the third class, I had introduced the song in Spanish, a language I knew most of Ms. Fincke’s class was familiar with. Suddenly, the looks on their faces changed and they realized they knew the words. The kids lit up with excitement when they felt that sense of home and comfort in the classroom. Ms. Fincke and I always took time for the Spanish language and that was important to her students. It was also crucial for Ms. Fincke to take time to do translations and have the kids work together through their language differences.

It was important that we did not tell them to always speak English. Yes, we were in an environment where English was the primary language, but we also wanted them to hold strong to their heritage. Seeing them take ownership of their language was inspiring. We often let them sing and dance in Spanish and those were truly their moments to shine and demonstrate how far they were excelling in the knowledge and understanding of the skills we were sharing with them.

It’s been amazing to watch these students grow, interact with one another, and also feel better about themselves. It’s important to get them thinking about these things at an earlier age because I think that we often forget that children can have problems and stresses, too. We think that they don’t have any issues because they’re young, but our youth go through so much. They are witnesses to everything. They may be young, but they are just as much a part of our world as we are. Using dance and movement to build our youth into better citizens is something that empowers me as an artist.

Learn more about Valerie Branch and her dance programs for schools.