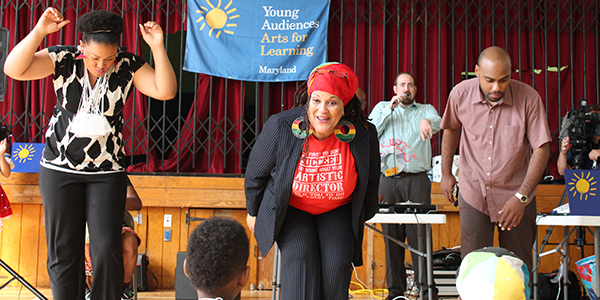 Welcome to the Summer Arts Academy 2015!

Young Audiences has again partnered with Baltimore City Public Schools to make sure that arts-integrated learning does not end with the school year. On Monday, June 29, energy filled the gymnasium of Thomas Jefferson Elementary/Middle School as Young Audiences artists greeted 250 Baltimore City students and their families with high-energy performances, live music, and vibrant interactive art demonstrations during the kick-off assembly of the Summer Arts Academy.

The Academy is a five-week, city-wide program that provides students, third-grade through seventh-grade, with a free once-in-a-lifetime opportunity to spend their summer learning from the talented artists who live in our communities. The Academy was created as part of City Schools CEO Dr. Gregory Thornton’s plan to increase arts education opportunities for Baltimore City students. The Academy’s literacy component, with the overarching theme of “What Makes a Hero?” will be team-taught through the arts by City Schools teachers and faculty artists specializing in visual art, sound production, clay, African Drumming, modern and African dance, and improvisational and urban theatre. The Academy also gives students the opportunity discover art forms they have never experienced before and delve into two artistic disciplines of their choice. Students will perform at Artscape and visit other arts destinations through field trips. See the full list of the Academy’s artist faculty here!: Summer Academy Artists 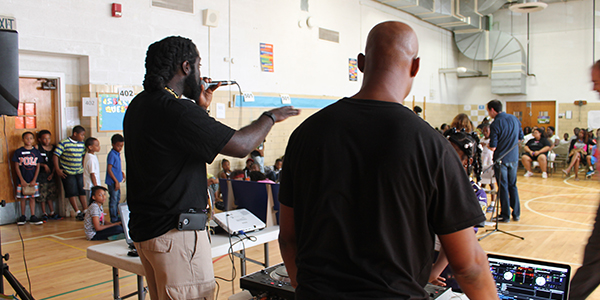 Hip Hop musician Jamaal “Mr. Root” Collier set the stage for the crowd during the Academy’s kick-off assembly. Joined by another Young Audiences musician, Kevin Gift, on the turntables, the performance used high-energy beats, improvised rapping, and beatboxing to get the crowd swaying and dancing. A couple of shy boys watched from afar, but slowly began to inch their way toward the booming set with growing curiosity.

Nearby, the dance moves of Cynthia Chavez of Baltimore Dance Crews Project (BDCP), caught the eye of three girls who were interested in learning how to moonwalk. Cynthia worked through foot techniques and demonstrations until the girls were ready to  try it themselves. 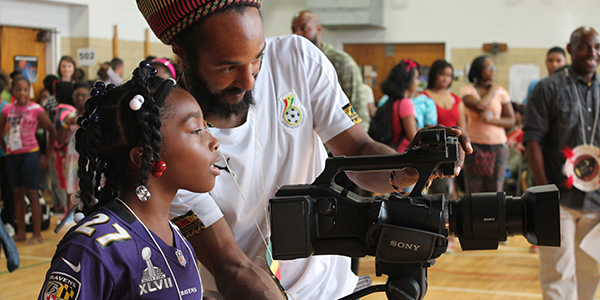 Artists, students, and family members began to gather on the dance floor as the popular music began to flow out of the speakers. One talented student stepped toward the center of the floor with confidence. He began to lead the choreography of one popular song while the crowd stepped back, learned the moves, and cheered him on. This encouraged other nearby students and artists to join in until the entire dance floor was full.

The assembly wrapped up with artists, teacher partners, and other Academy staff introducing themselves by dancing onto the stage. As students broke off into their grade-level groups, one parent asked: “Is there an adult Young Audiences class that the parents can take? We want to have this much fun, too!” 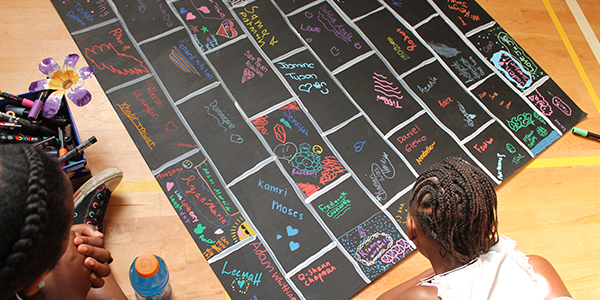 On average, all children can lose approximately two months of learning from the previous school year during the summer months without engaging education activities, and for low-income students, the loss is even greater. More than half of the achievement gap between low-income students and their more affluent peers can be attributed to the unequal access to summer learning opportunities. Programs like the Summer Arts Academy provide students with a safe place to go during the day, access to free healthy meals, adequate adult supervision, and positive, educational activities.

The high-energy kick-off assembly was only the beginning of what is to be expected this summer. Be sure to follow the Young Audiences blog, as well as our Facebook page, for updates from the Summer Arts Academy throughout July.