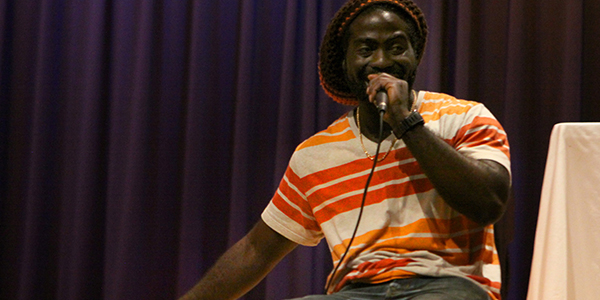 Hip Hop and History: Telling Stories of the Past and of Ourselves

During the course of my fifth-grade class’ six-day Hip Hop residency with Young Audiences artist Jamaal “Mr. Root” Collier, walls were broken down, confidence was built up, and the entire context of my classroom changed for the better.

As an educator I work hard to provide my students with diverse learning opportunities that give each child a chance to shine. However, I did not anticipate how effective Mr. Root’s strategies would be for the many different types of learners in my class. I went into this experience hoping that Mr. Root might be able to give a fresh perspective that would help my students summarize and internalize autobiographical texts. By the end of the residency, I knew that my students gained abilities far beyond that, having learned more deeply about how they express themselves and their story along the way.

Our time with Mr. Root began with an interactive assembly where he introduced the history of Hip Hop and taught students about the five components of this complex art form. Mr. Root motivated students by giving them the opportunity to participate in making beats and validated their contributions by recording and using their input right there on the spot. The students cheered and looked on as he mimicked some of their favorite Rap musicians.

The real magic happened when Mr. Root returned to our classroom and engaged with the students in a more intimate setting for a series of workshops. In a classroom of 20 students he quickly learned everyone’s name and became part of our classroom community. The kids shared with him that we were reading “The Narrative of the Life of Frederick Douglass” and he began to teach them how to summarize the content through the use of rhyming couplets. This strategy challenged students to return to the text over and over (an academic demand that is typically frustrating to them) to fish out the most important information. They reflected on the value of certain facts and determined which details could combine to most effectively summarize the text.

Together the class wrote a rap that brought the story of Frederick Douglass to life. It was truly amazing to see students who are usually self-conscious about participating come to the front of the room to offer input on better ways to write a line or to question if the number of syllables in a line would be best for the flow of the rap. The class later performed their work for the whole fifth grade during our culminating assembly at the end of the residency.

This was their final product:

Listen to the audio here!

Thought they were happy when slaves sang songs
But they sang about pain… Slavery was wrong!

After discussing the components of autobiographical writing in reference to our work with Frederick Douglass, we turned our focus to the need to know oneself in order to write an authentic autobiography. Students shared that sometimes people act certain ways to get attention but this behavior doesn’t necessarily accurately represent who they are as a person. Students brainstormed a number of ways that people wear “masks” on a daily basis to cover up how they are really feeling or to alter the way that the world perceives them.

Mr. Root led the students in an essay-writing exercise about how the “masks” each of them wear impact their relationships with others. Each student considered what they wanted to show the world through their actions and their autobiographical writing. To accompany their essay, students also created actual masks with construction paper, which were proudly displayed at the school-wide literacy fair in October.

In the end, my students learned how to be vulnerable with one another, brave enough to share their feelings, and empowered to use their voices to express everything they learned. Whether through singing their Frederick Douglass rap, expressing their ideas visually with their masks, or by simply having the confidence to think creatively, each and every one of my students came away with a unique perspective on who they are as individuals.

Going forward, I am excited to continue incorporating the components of Hip Hop to benefit my students’ learning and I am so pleased with this incredible learning experience. Thank you, Mr. Root!