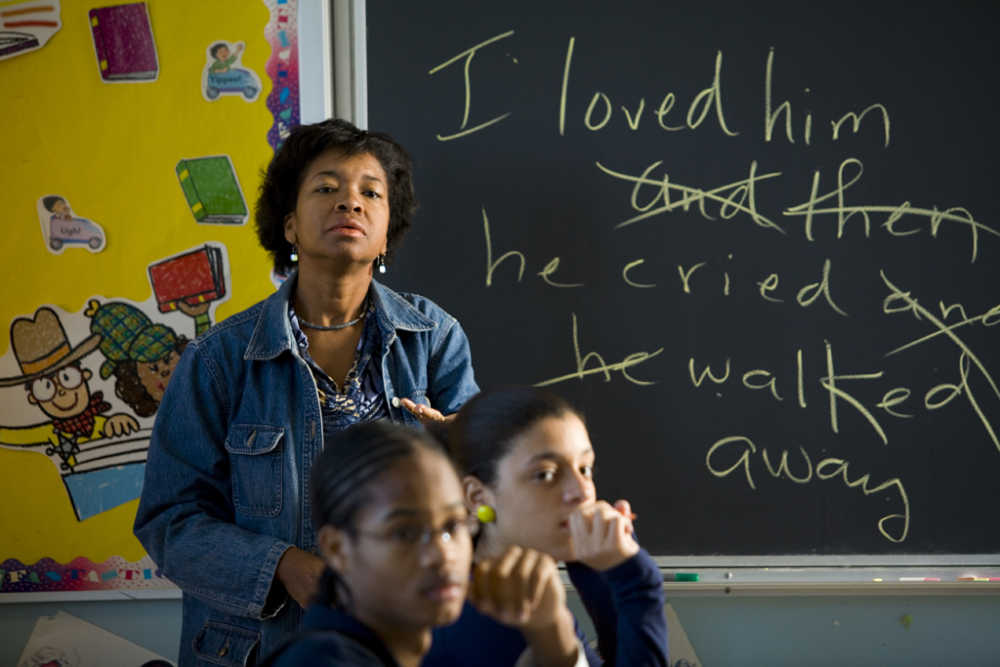 As a Young Audiences volunteer, I’ve been fortunate enough to watch a variety of artists at work in the classroom. And the results always amaze and humble me. Whether it’s rapping the multiplication tables, or acting out a storyline, or drawing to illustrate a book’s theme(s), I love how the arts grab kids’ attention and not only hold it, but draw them out, asking questions, trying out new ideas, and expanding their horizons.

But it dawned on me that I had never watched a class in its entirety–had never witnessed the full lesson plan. I finally got a chance to do so recently when I visited Ms. Bradley’s eighth-grade Honors English class at Chesapeake Science Point Charter School in Hanover, Maryland. Over the course of a week, Gayle Danley, an internationally recognized slam poet, was there to guide them in writing their own poems.

Full disclosure: Gayle is a personal friend of mine. I met her five years ago when she mentored my daughter, Colette, who had been asked to speak at Young Audiences’ annual Impact Breakfast. And over the years, I have watched her perform at YA events and in her own shows. But I had not yet witnessed her in action in the classroom. 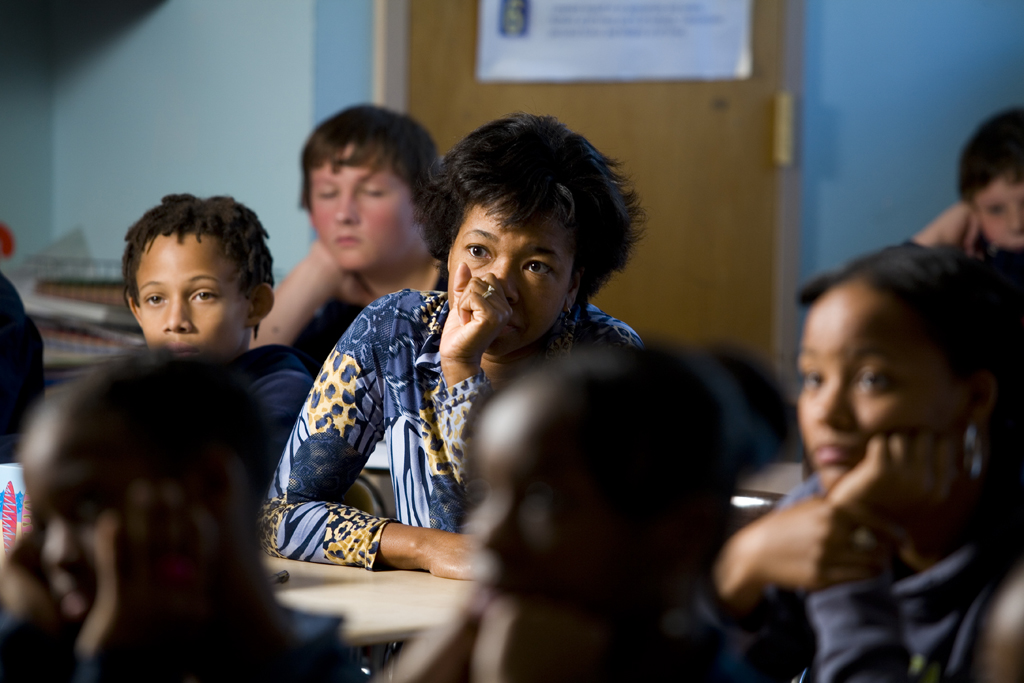 And so, I found an inconspicuous spot from which to observe. Gayle quickly got to the heart of the lesson. She had started working with the class on Monday, so she now asked for volunteers to read the poems they had written since then. She instructed them to listen carefully and write down two things: 1) a sentence or phrase they really liked; that they could truly identify with and 2) a sentence or phrase they didn’t like or didn’t understand.

“So, who wants to go first?” After a predictable silence, Gayle encouraged them, “Poets have to be afraid sometimes. I know you’re afraid to share your work. But if you come up here, we’ll support you.”

After another quiet pause, one brave soul ventured forth. “Let’s hear it for the poet!” Gayle shouted, and led the class in applause. Even so, the first girl almost returned to her seat. But by then, her classmates were shouting their own encouragement, “You got this!” “Own it–you’re already up there!”  “You can do it!”

And so she read. Sometimes Gayle interrupted to ask her to slow down or to speak louder. Another time she stopped her to ask the class what they thought of one line, “how does that make you feel?” When the teenager had finished, Gayle again led the applause and praised her for being first.

Then she asked the class for their favorite and least favorite lines, and asked them to explain. At one point, Gayle focused on “f-a-i-t-h,” which the young woman had spelled out rather than saying the word. She asked if that bothered anyone, threw them out of the poem temporarily because that’s how Gayle had felt. And when there was no comment, she asked, “Ms. Barbara, what about you?”

And so, being honest, I answered that I had actually liked that because it made me truly pause on that word and think about it. Hopefully, that was a good teaching moment about how unique poetry is and that your own personal experience will guide your interpretation!

Back at the front of the classroom, Gayle pointed to words that were written on the board: Wring, Fling, Bling, Sing. “Let’s talk about these for a while.” And for the uninitiated (as I was), Gayle describes this as her writing process.

As she described this, I laughed internally because I recognized my own writing process. Except I had always described it (skip this part if you’re squeamish) as the vomit method. Throw it up on the paper and clean it up later. Leave it to a poet to be, well, more poetic about it! 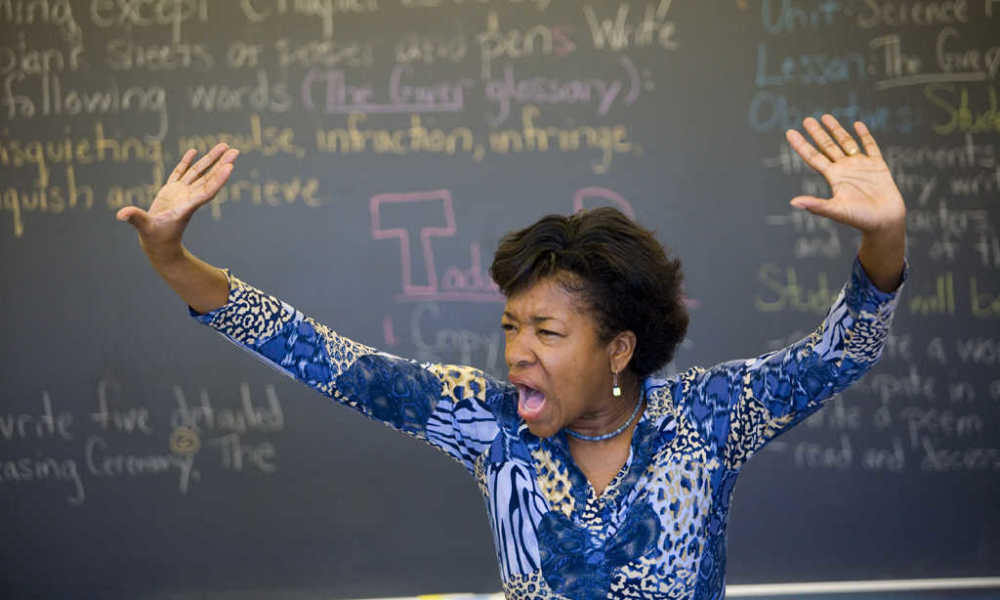 And so it went. Kids coming to the front, reading their poems, a start-and-stop process to consider edits. “When you say ‘ancestors,’ I think it would be good to be more specific. What if you substituted ‘Rosa Parks’ for ancestors?”

“His color was dangerous,” Gayle repeated from another poet. “What is dangerous?” she asked the teens. “A knife!” “A gun!” “A wild animal!” And with those words, she suggested illustrating the danger more concretely with a visual image that would strike the listener/reader.

As the lesson wound down, I gathered my things to leave. Did I mention there are no observers in this classroom? At the beginning of the lesson, the teacher had explained what she was looking for in an assignment that talked about regional differences and dialects in language. Before I could exit, I found myself surrounded by a group of three girls who asked me where I was from (North Carolina), how did I pronounce “pecan” (accent on the second syllable), what word do I use that generally isn’t used in other parts of the country (y’all).

Signing off on their papers, I felt excited to be a part of their education even in such a small way, inspired to try this on my own, and happy to be a tiny part of Young Audiences’ mission to reach kids through arts-integrated education. With Gayle’s teaching style demonstrated, I am ready to Wring, Fling, Bling, and Sing on my own!